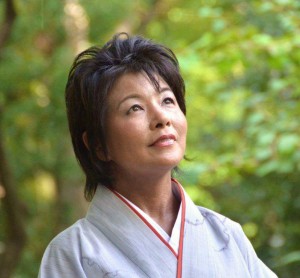 After graduating from the Osaka University of Arts, Ukiyo started her career as a graphic designer.
While working for a major company, she studied scenario writing under the great film director
Kaneto Shindo to achieve her long-cherished dream of becoming a writer.
Following her nomination for a finalist in the Japan Scenario Grand Prix, Ukiyo won the first prize
in the Scenario Writer Contest in 2005.
Her biography of Ms. Fudeko Ishii, a pioneering welfare activist in the Meiji Period, was cinematized
in 2007 with Takako Tokiwa in the main role.

Ukiyo further developed her career in Japanese historical writing.
Ukiyo’s historical writing is not limited to paper publications, her deep interest in the metropolitan Edo(the former name for Tokyo) lifestyles has recently led her to publish books on Edo-style recipes.

Another specialty of Ukiyo Kuruma is ukiyo-e, Japanese wood block print. With her wide knowledge of the Edo culture, she gives lectures at adult colleges and seminars focusing on ukiyo-e, which depicts lives of people in the Edo-era, such as kabuki actors, sumo wrestlers, geisha girls, and ordinary people enjoying public baths or parties.
Ukiyo is particularly interested in the fact that ukiyo-e prints had a decisive influence on European Impressionists and Post-Impressionists, including Edouard Manet, Claude Monet, Paul Cezanne and Van Gogh.
The eccentric compositions and unconventional techniques of ukiyo-e artists greatly astonished Europeans of those days, who were used to traditional, realistic paintings. It is fair to say that ukiyo-e helped revolutionize Western art in the 19th century.
Ukiyo’s lectures on ukiyo-e include erotica masterpieces, which have not been openly discussed in the past but have high artistic value. These images are rarely seen due to their erotic natures.

As a student of rakugo master Sanyutei Ensou, Ukiyo practices rakugo, or comic story telling, and enjoys performing it on stage. She is also engaged in other traditional Japanese hobbies, including haiku (short poems), kouta (ballads sung to shamisen), tea ceremony, flower arrangement and Japanese cooking.